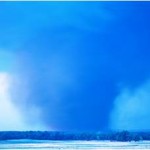 Some people have a dark cloud hanging over them, a reputation that continues to drag them down in their career.

I had the chance to coach a lady who had been involved with a failed project some years ago, who felt that the memory of this was holding back her advancement.  I also worked with another gentleman who had worked for a boss who didn’t like him, had given bad performance reviews, and spread rumors my client felt were unfounded.

When this happens to you, your “lizard brain” takes over.  Its primary tool in this case is the fight-or-flight response:

Fight:  Start complaining and undermining the people who you think have done you wrong.

Flight:  Deny the reality, or move to an environment where you can start fresh.

Both of these responses may be valid in some situations.  If someone is doing something illegal against you, you have a right to take it to court.  And if an environment is truly toxic for you, perhaps escaping that will help you move forward.

But many times, these would be extreme reactions.

In that case, I have three principles I work with people on:

This is where it can be useful to reconnect with the character traits of who you aspire to be.  If you want to live a life which is industrious, truthful and loving, then you can start acting that way today.  Despite what others have done to you or the mistakes you’ve made, you always have the choice of which character traits you embody.