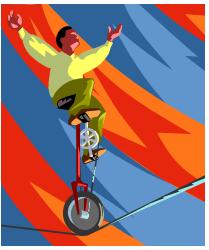 How many times do you know what the right thing is to do, but lack the courage to act upon it?  Humans are wonderful at rationalizing, at finding creative excuses to avoid doing what’s hard.  Myself included, of course.

I’ve had a few defining points in my career where I chose to stand on principle, for the long term and the big picture.  I find these hard to explain to other people, though, so I’ve come to the conclusion that each of us has to face different tests during our lifetime.  What might have been a big deal for me may only be a big deal because of what went on in my mind – a permanent shift in my attitude.

Perhaps to others it merely looked like a minor decision, but that’s not what matters.  It was a big decision for me.

Imagine this:  You’re in a situation where you see a serious injustice being done to someone else.  You could choose to:

As you progress through this list, you’re trading off the risk that you’re taking with the impact that you might have.  I can’t say which might be the best choice – not only because we haven’t defined the issue, but also because it’s your own choice.

But here’s the big question for you to ponder:  In which areas would you stand up for your principles, even to the point of taking big risks?  What would be so important that you might even bet your career, or your life?